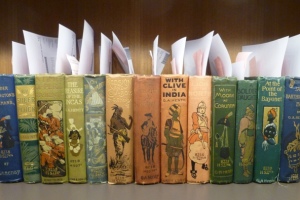 A selection of G. A. Henty titles from the National Library of Australia’s collection.

It’s the opening decade of the 20th century. Right across the British Empire, boys are filling their heads with imaginings of adventure and fighting and war. They are supping at English author G. A. Henty’s fictional table and they are replete.

(You can read more about Henty and his copious output here.)

Reading Henty ‘Down Under’

Among this squadron of imperial boy readers is a troop from the Australian colonies.

Let’s picture one of these colonial lads; we’ll call him Tom. It’s December 1908 and Tom is 11 years old. He receives, as his end-of-year school book prize, a copy of Henty’s By Conduct and Courage: A Story of the Days of Nelson.

Perhaps Tom, or his brothers, had received other Henty titles over the years and this new book will be added to the family collection. (Imagine there are copies of Under Wellington’s Command: A Tale of the Peninsular War and With Kitchener in the Soudan already on the shelves at home.) Suppose, too, that Tom’s father, who had read serialisations of Henty tales in the newspaper when he was a boy, has borrowed a Henty title from the local Mechanics’ Institute. The lad’s father recalls devouring The Young Colonists: A Tale of the Zulu and First Boer Wars when he was Tom’s age. Now he plans to share it with his son.

Be Ready to ‘Play a Young Man’s Part’ 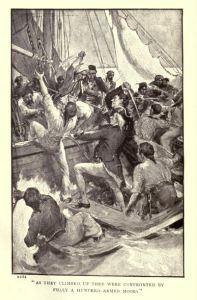 Frontispiece. By Conduct and Courage: A Story of the Days of Nelson.

Tom reads Henty fictions as if they are historical fact; he is convinced by the author’s declarations of careful research. He imbibes the Henty philosophy—boys should grow up to be ‘bold, straightforward, and ready to play a young man’s part, not to be milksops’. He also absorbs Henty’s ‘horror of a lad who displayed any weak emotion and shrank from shedding blood, or winced at any encounter’ (Fenn, p. 334).

What effect do these narratives have on Tom’s emerging sense of self? Maybe he pictures himself, in a bygone time, standing beside Nelson on the Victory, or with Wellington in Spain or Kitchener at the Battle of Omdurman. Tom’s understanding of the world, and his potential role in it, is being forged by Henty.

Tom has just turned 18 and war is talking hold on the Balkan Peninsula. Advertisements appear in newspapers across Australia imploring men to ‘enlist now!’ Do Tom’s memories of Henty’s historical tales blend readily with these fresh calls to fight for the ‘Great British Empire’?

Henty himself certainly believed his stories had a tangible effect on his youthful readers. The author’s entry in the Oxford Companion to Children’s Literature states: ‘Some of the jingoism and enthusiasm to serve in the army that marked the beginning of the First World War is sometimes laid at [Henty’s] door, and indeed he wrote with pleasure in the Boy’s Own Paper (1902) that “officers of the Army and Volunteers have assured me that my books have been effectual in bringing young fellows into the Army”’ (p. 243).

And So to War

Writing from a southern hemisphere perspective in 2006, Angela Woollacott, in her book Gender and Empire, argues that Henty’s stories ‘imparted to the rising generation of soldiers, colonial administrators, and citizens of both colonies and metropole a visceral sense of the excitement and importance of the empire … Generations of British and white-settler boys’, says Woollacott, learnt ‘that the empire proffered an amazing array of exciting places where they could test their mettle and prove their worthiness to family, God and country’ (p. 60).

And so, in 1915, Tom and the ‘rising generation’ enlisted in the AIF—a fighting force that meshed both ‘Australian’ and ‘Imperial’ identities.

In 1919, some of them came home. Were they still thinking of Henty’s valorisation of the British at war? And, if they were, might they have agreed with Henty’s biographer, George Manville Fenn, that Henty’s images of fighting were ‘here and there a little too bright in hue’ (p. 321).

As I was writing this Henty instalment, I happened to read the transcript of an address delivered at a higher education conference in March 2017 by Jeffrey Bleich, US Ambassador to Australia, 2009-2013. In the course of his talk, Bleich reminded his audience of the changes wrought by the second Industrial Revolution during the period 1875 to 1915. ‘It fundamentally transformed how people live’, he said.

Like the ‘disruptive technologies’ of the current Digital Revolution, these rapid and extensive changes left much of that earlier population with feelings of uncertainty, disorientation and anxiety. Bleich’s observations made me wonder whether those Australians who went to fight for Empire in 1915 ultimately discovered that they were fighting for a world that had already past—just like the worlds in G. A. Henty’s novels.

The third (and final) part of this reflection on G. A. Henty will take a closer look at Henty’s only Australian novel—A Final Reckoning: A Tale of Bush Life in Australia.

2 thoughts on “G. A. Henty and Australia—Part II”

This site uses Akismet to reduce spam. Learn how your comment data is processed.