Opening lines can hook me from the ‘get-go’. They can also demand that I knuckle down and trust the author. (And sometimes they give me a sinking feeling, making me wonder what I was contemplating when I chose the book in the first place.)

What is the job of opening lines?

Is it to give a hint of what is to come? – ‘It was the best of times, it was the worst of times’ (A Tale of Two Cities, Charles Dickens).

Is it to introduce a pivotal character? – ‘“Christmas won’t be Christmas without any presents,” grumbled Jo, lying on the rug’ (Little Women, Louisa M. Alcott).

Does it offer a glimpse into a world never before visited? – ‘The island of Gont, a single mountain that lifts its peak a mile above the storm-racked Northeast Sea, is a land famous for wizards’ (A Wizard of Earthsea, Ursula Le Guin).

Many of us can quickly conjure some famous opening lines.

Shakespeare’s prologue in Romeo and Juliet – ‘Two households, both alike in dignity, / In fair Verona, where we lay our scene’.

Leo Tolstoy’s ‘Happy families are all alike; every unhappy family is unhappy in its own way’ in Anna Karenina.

Why do we remember these lines? Is it the rhythm of the words or a fondness for a certain character, or is it because the lines evoke in us a reading memory from a particular time in our lives?

Each Monday in 2019, I tweeted the opening lines from a book that has sheltered on my shelves or kipped on my Kindle. Some of the books have been with me since childhood, others are more recent acquisitions. I had no particular schema in mind when choosing my ‘Monday Morsels’. I re-visited books at random and my selections fell, variously, into the categories noted above.

Here is a sample of the 52 beginnings I selected.

I opened the year with a quote from Harpo Marx’s autobiography Harpo Speaks. In the Marx Brothers movies, Harpo was the wig-wearing, silent partner. His 1961 autobiography, published just three years before his death, begins with this kernel of wisdom:

I don’t know whether my life has been a success or a failure. But not having any anxiety about becoming one instead of the other, and just taking things as they came along, I’ve had a lot of extra time to enjoy life.

When the new school year began, my thoughts turned to a book I first read when training as a primary school teacher – Herbert Kohl’s 36 Children (1967). Kohl had studied philosophy and mathematics at Harvard, Oxford and Columbia universities before pursuing a career in teaching. His ethos – along with that of New Zealand’s Sylvia Ashton-Warner – informed my own approach to teaching: start with the children and their cultural environment, and work from there.

My alarm clock rang at seven thirty, but I was up and dressed at seven. It was only a fifteen-minute bus ride from my apartment on 90th Street and Madison Avenue to the school on 119th Street and Madison.
There had been an orientation session the day before. I remembered the principal’s words: ‘In times like these, this is the most exciting place to be, in the midst of ferment and creative activity. Never has teaching offered such opportunities.’

‘The History of England, by a Partial, Prejudiced, & Ignorant Historian’

Some weeks later, I chose a morsel from Jane Austen’s writing. Austen’s devotees are spread across the novel-reading world. The first words of Pride and Prejudice are so well known they still regularly appear as the opening gambit of newspaper and magazine articles  (‘It is a truth universally acknowledged…’).

Instead of Austen’s best-known opening, I selected the start to one of her works of juvenilia, ‘The History of England’ (c. 1791):

Henry the 4th ascended the throne of England much to his own satisfaction in the year 1399, having prevailed on his cousin and predecessor Richard the 2nd to resign it to him, and to retire for the rest of his life to Pomfret Castle, where he happened to be murdered.

These words are re-used by scriptwriter and director Patricia Rozema in her 1999 film adaption of Austen’s Mansfield Park. If I remember the film rightly, a young Fanny Price is shown penning the words in her crowded Portsmouth home before moving to her Bertram relatives’ expansive estate, Mansfield Park. I must watch Rozema’s adaptation again. Exercising directorial creative licence, she shines a light into some dark corners of Mansfield Park, including Sir Thomas Bertram’s profiteering from sugar plantations in Antigua.

(Images of Austen’s note book, and full text and audio, are available via the British Library.)

By April, I’d moved from England to Paris and Albert Lamorisse’s The Red Balloon. The Red Balloon began life as a short film of the same name, written and directed by Lamorisse, and starring his children. The film won a Palme d’Or at Cannes for Short Film and an Academy Award for Original Screenplay. Stills from the film were used as illustrations for the book. (Both the film and the book appeared in 1956.)

In the mid-1960s, I discovered a copy of The Red Balloon in my primary school library in Bendigo. I have never forgotten Pascal and his faithful balloon.

Once upon a time in Paris there lived a little boy whose name was Pascal. He had no brothers or sisters, and he was very sad and lonely at home.

One of my Monday Morsels for July was a new translation (2017) of a very old tale: Emily Wilson’s version of Homer’s The Odyssey. One of the appeals of Wilson’s translation, the first by a woman, is pinpointed in Charlotte Higgins’ review in the Guardian: ‘Whereas male translations have a habit, perhaps quite unconsciously, of letting Odysseus off the hook (He tried his best! He just couldn’t manage it!), Wilson is more attentive to the poem’s foldedness, its complexity.’ Even so, Wilson is stuck with a clouded male protagonist and a largely male cast of characters. Madeline Miller’s Circe and Pat Barker’s The Silence of the Girls offer leaven for Odysseus’ heroic lump.

Tell me about a complicated man.
Muse, tell me how he wandered and was lost
when he had wrecked the holy town of Troy,
and where he went, and who he met, the pain
he suffered in the storms at sea, and how
he worked to save his life and bring his men
back home.

Another July morsel was John Buchan’s The Thirty-Nine Steps (1915). I studied this book as 14-year-old at Methodist Ladies’ College, Kew, but I confess that I cannot recall a single thing about the storyline. I still have the copy I used at school. It is a 1942 edition that had previously belonged to my father. My strongest memory from studying Buchan’s spy thriller (was it an odd choice for impressionable young Methodist ladies?) is that I was very cross at having a different edition from my classmates – none of the page references issued by our teacher matched those in my second-hand copy.

I returned from the City about three o’clock on that May afternoon pretty well disgusted with life.

The year continued with assorted openers ranging from Edward Lear’s The Owl and the Pussycat who ‘went to sea in a beautiful pea-green boat’ to Rosemary Sutcliff’s The Eagle of the Ninth where, ‘from the Fosseway westward to Isca Dumnoniorum the road was simply a British trackway, broadened and roughly metalled … thrusting further and further into the wilderness’.

I meandered towards year’s end with Albert Camus’ The Outsider (‘Mother died today. Or, maybe, yesterday; I can’t be sure’) and Hilary Mantel’s Bring Up the Bodies (‘His children are falling from the sky’).

Then, after tweeting 51 opening lines, the final Monday Morsel looked to the new year.

‘The Gate of the Year’

Minnie Louise Haskins’ poem ‘The Gate of the Year’, first published privately in 1912, is as familiar to me as my grandmother’s cream puffs and butterfly cakes. A framed copy of Haskins’ poem hung on Grammo’s kitchen wall, just beside the stove. I cannot picture Grammo baking without also seeing the verses that steadied her through 40 long years as a war widow.

And I said to the man who stood at the gate of the year:
‘Give me a light that I may tread safely into the unknown.’
And he replied:
‘Go out into the darkness and put your hand into the Hand of God. That shall be to you better than light and safer than a known way.’ 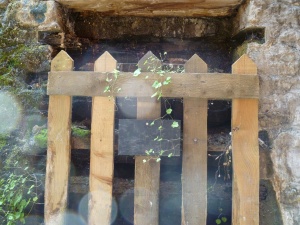 A Note on Links and Sources

Links for most of the books cited in this post go direct to the publisher’s website. (A high percentage of the books are published by Penguin.) Links to some older and out of print books go to Booko. The Booko links provide a range of options for finding the books via international and second-hand sources.